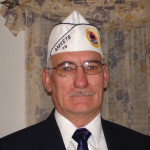 *First I would like to congratulate Mary Steinbach for a successful recognition dinner and thanks go out to everyone who helped set up, take down and clean up the hall.  Many thanks also to those that donated food items, worked in the kitchen and just let Mary know, “we appreciate her”.  I want to add a personal “thank you” to Sandy K. Dietz, Patty Kaiser, and Sally O’hare for the tasty chili and kitchen help on Sunday.  I heard so many positive remarks on the facility from our visitors that came from all over the state.

*That said: AMVETS is considering holding their State Convention here in 2018.  In order for this to run smoothly and effective, several items regarding staffing, hours, accessibility, and a few minor details will have to be addressed.  This again is an activity that brings people from all over the State and frequently National Officers from “anyplace USA”, hoping these items can be addressed.

*Reminder to all:  AMVETS meets the 2nd Wednesday of each month (7:00 PM), AMVETS Auxiliary meets the 3rd Wednesday (7:00 PM) and the Sons are working on scheduling a monthly meeting.  These meetings are there for YOU.  Several people have commented or had questions for me that I do not have answers for, and this is YOUR opportunity to present them to AMVETS WAVP board members.  The floor is always open for honest discussions and questions and your concerns are probably shared by more than just you.  Nobody can fix or address items that they don’t know about, so come to a meeting, or write them in a signed letter and present them.

*The box of items collected for the Iowa Veterans Home was delivered the first Friday in January and was greatly appreciated.  Thanks to ALL that donated, whether large, small, many or one item, they will get used.

*REMINDER:  The countdown continues towards Post elections, and if you are interested in getting involved, either a little or straight to the top, come to the meeting in February.  Due to a commitment at the Iowa Veterans Home followed with a visit to the Iowa City VA Hospital, I will not be present at February’s meeting, so a great time to express yourself.   I have commented before, but in case you missed it, “I will not continue as Post Commander and it is time for young ideas”.

*I would like to express my “Thanks” again for the support over the last seven years and may all of you stay safe.  I am saddened to hear that several of our AMVETS family have had encounters with the ice, some serious and some just “oh sh_t”.  No matter what the encounter, it hurts and our prayers go out to those more serious.  Please let us know how you are doing or if some help is needed.

*June is here and school is out, summer vacations scheduled, camping and fishing trips planned and children enjoying their time

off and Waverly’s parks.  As you drive through Waverly or any community, please be observant for children, especially in areas of parks, pools, sports fields and construction sites, which is most of Waverly.  We know their minds are not on safety, so our extra precautions are needed.

*More THANK YOU’S to hand out:  Donations towards the grill include the families of; Bob Davidson, Richard Miller, Bob O’Hare, Larry Williamson, Jim Darrah and many others.  Thanks to Bev Besh for his spaghetti dinner and Bill Decker for stepping up and assisting Bev.  A special Thanks to my Grandson, Dain Ferguson, who helped at the breakfast and Bev’s dinner.  I would hope more young adults would be willing to come and help for an hour or two, as our customers enjoy seeing and visiting with them.  Thanks to Darwin & Connie Ramker for offering to purchase Red Solo cups for outside sales.  Thanks to Bob & Sally O’Hare for stepping in and doing the cleaning so I could go to Minnesota for the annual cemetery maintenance of family grave sites.

*The license for outside sales has arrived and an area set aside for this, but (always a but) the weather needs to start cooperating.  We will be scheduling a steak fry, but no firm date set at this time, so keep in touch.  Willing to help with one, please leave your name at the Canteen or contact me.

*Effective June 1st, the Canteen hours will be extended on Fridays and Saturdays for 1 hour with a closing time of 10:00 p.m.  These hours are set by the Food & Beverage Committee and not by the bartenders, so please accept the announcement of “Last Call”.

*The Department of Iowa AMVETS will be having their State Convention in Marshalltown on June 12, 13, 14 with election of State Officers on Sunday June 14th.  A tradition started during my term as Department Commander, when we have our Convention in Marshalltown, the Sons of AMVETS and now with the AMVETS Riders host a barbeque at the Best Western and a bus load of Veterans from the Veterans Home are our guests.  What a great time visiting with these Veterans and do they ever enjoy getting out and visiting and eating.

*If you are interested in getting a replacement AMVETS membership card, the simplest way is to go on line.  Go to the AMVETS National site – www.amvets.org   –  Member Center   –  Update Membership Information & Login   –  Utilize your membership number and then click   – My Shopping Cart   –  Merchandise Store  –  ADD TO CART.  While on this site check your information and correct it.  Problems, contact me and we will try to solve it together at the Canteen computer.

*Recently several members of our AMVETS family have had an argument with their bathroom.  A smart suggestion by my wife was going to Menards and getting a couple of suction cup handles for our shower.  These are not designed to support your weight, but will help you maintain your balance.  Will have one at the Canteen for you to look at or try at the Canteen.  Other places may sell these, so check that out, but they could make the difference between a slight slip or a fall.

*Please check the boards at the Canteen for information regarding the information of a WWII Boeing B-17 bomber coming to Waterloo from June 12-14, 2015.  This is the same aircraft that was in Waterloo last year and was a huge success.  A chance like this does not come around too often, so “go for it”.

*As I end my 10th year (not consecutive) and start my 11th as Post 79 Commander, I want to thank the AMVETS Ladies Auxiliary and Sons of AMVETS for all the wonderful things they do.  The hours they volunteer, dollars they contribute, scholarships they offer, plus many other activities are just a few of the things that make me proud as I continue for one more year.

*From my family to all of you, “Have a safe and enjoyable summer’’.

*From my family to all of you; as we enter April, may everyone have a Blessed Easter and enjoy the weekend with family and friends.  Spring is here and as we drive around and notice the new life in gardens and flower beds, let us also start a new life by being forgiving, calling someone you have lost contact with, and reaching out to someone who needs help.  You will feel the reward with your heart and carry that with you forever.

*A list of volunteers we need to thank is posted in “Latest News” and under “Gallery”, pictures showing the VFW Post and the remodeling/updates to the American Legion Post.  Please take the time to review them and if you wish to use one of the pictures, left click on it, (it should enlarge), then right click and then left click on save image as.  Then download or save in a file of your choosing.  These are pictures of our history: all posts, all branches, all Veterans, all Patriots.

*The comments I have heard so far have been positive regarding the Legion Post and how the canteen is set up.  We did reposition the pool table and have now added some hooks (for purses) and a foot rest to the bar.  Our challenge now is to get Thursday food nights going again and making arrangements to start the steak fries.  To those of you that 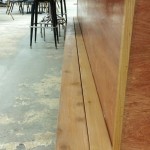 have visited and found it accommodating; invite a friend or two, give us some feedback, and ideas.  Your feedback or ideas, should also include what YOU will do too assist with those items.

*From last month of items purchased to help the kitchen/canteen please note the additional items:

*Thanks also go to Duane & Jan Rieckenberg for the donation of new sweatshirts to the Iowa Veterans Home and to Garry’s Tire Service for upgrading the tires on the trailer used for hauling the Harlington Cemetery flagpoles. 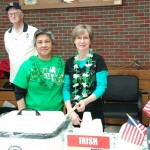 *Noteworthy:  On March 21st; Patty Kaiser, Jean Lanske, myself and help from AMVETS Post 31, Evansdale participated in a “Foreign Food Fair” at the Iowa Veterans Home in Marshalltown.

Participating Veteran’s organization are responsible for providing food for residents to try.  Approximately 110 residents participated along with about 30 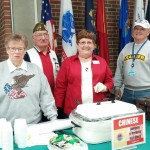 volunteers.  Assisting and watching these residents, their excitement and comments, gives me a reality check on just how blessed I am.  Happy Easter to all of you.

April 4, 1949 – The North Atlantic Treaty Organization (NATO) was created when twelve nations united for military defense against the expansion of Soviet Russia.

April 6, 1917 – Congress approved a declaration of war, and the U.S. entered WWI in Europe.

April 10, 1942 – This was the start of a six day march of American and Filipino prisoners (76,000 Allied POWs) without food or water, the Bataan Death March, of which 5,000 Americans perished.