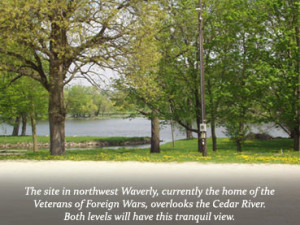 The Waverly Area Veterans Post Board of Directors continues its efforts to build a new Veteran Service Center in Waverly.

To date, over 410 families and businesses have donated or made pledges to the project.

Outside the area, the project captured the attention of actor Tom Hanks and Retired General Colin Powell. “In December, we had a friend of the project drive from Wisconsin with a check”, states Board Chair Darrell Blasberg. “He remembered the military rights and tribute we gave his deceased brother earlier that year”.

Treasurer Lee Schissel reports that $1,282,750 has been pledged to date with over $100,000 pledged for in-kind support from various business trades.  The goal is to raise $2.5 million for PHASE I of the project.  PHASE II will include the parking lot and landscaping.

The Building Committee is working with area contractors to identify areas of cost savings. More requests for contractors’ involvement will be forthcoming as the plan unfolds.

The Board is working closely with INVISION Architects, Crescendo Consultants, and Iowa Northland Regional Council of Governments. The Board is in the process of naming Fund-Raising Co-Chairs for the final campaign thrust after recent Focus Groups gatherings with community leaders.