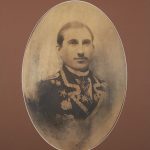 November 1918), I have included this article from Wikipedia.  My Grandfather, Anton August Lanske served in the German military reserves from 1908-1910, whom emigrated to the US in 1911.  We are a country of immigrants and my ancestry is no different than thousands of others; but sometimes I think “what if”, “would I be here”.  So I dedicate this piece of Military History to the millions of soldiers, (right or wrong) that served during WWI.

The Battle of Verdun fought from 21 February to 18 December 1916, was one of the largest and longest battles of the first World War on the Western Front between the German and French armies. The battle took place on the hills north of Verdun-sur-Meuse in north-eastern France. The German 5th Army attacked the defenses of the Région Fortifiée de Verdun (RFV) and those of the French Second Army on the right bank of the Meuse. Inspired by the experience of the Second Battle of Champagne the year before, the Germans planned to rapidly capture the Meuse Heights, providing them with an excellent defensive position that would also allow them to bombard Verdun with observed artillery fire.

Poor weather delayed the beginning of the German attack until 21 February, but the Germans 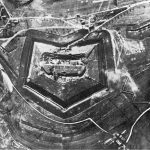 enjoyed initial success, capturing the defensive position of Fort Douaumont in the first three days of the offensive. Afterwards the German advance slowed, despite heavy French losses. By 6 March,  20 1⁄2 French divisions were in the RFV and a more extensive defense in depth had been constructed

In March, the German offensive was extended to the left (west) bank of the Meuse, to gain observation of the ground from which French artillery had been firing over the river, onto the Meuse Heights. The Germans were able to advance at first but French reinforcements contained the attacks short of their objectives. In early May, the Germans changed tactics and made local attacks and counter-attacks, which gave the French an opportunity to begin an attack against Fort Douaumont. Part of the fort was occupied, until a German counter-attack recaptured the fort and took numerous prisoners. The Germans changed tactics again; alternating their attacks on both banks of the Meuse and in June captured Fort Vaux. The Germans continued the offensive beyond Vaux, towards the last geographical objectives of the original plan, at Fleury-devant-Douaumont and Fort Souville. The Germans drove a salient into the French defenses, captured Fleury and came within 4 km (2.5 mi) of the Verdun citadel.

In July 1916, the German offensive was reduced to provide artillery and infantry reinforcements for 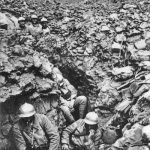 the Somme front and during local operations, the village of Fleury changed hands sixteen times from 23 June to 17 August. In August and December, French counter-offensives recaptured much of the ground lost on the east bank and recovered Fort Douaumont and Fort Vaux.

In the 1960s, Verdun became a symbol of Franco-German reconciliation, through remembrance of common suffering and in the 1980s it became a capital of peace. Organizations’ were formed and old museums were dedicated to the ideals of peace and human rights.[126] On 22 September 1984, the German Chancellor Helmut Kohl (whose father had fought near Verdun) and French President François Mitterrand (who had been taken prisoner nearby in World War II), stood at the Douaumont cemetery, holding hands for several minutes in driving rain as a gesture of Franco-German reconciliation.

For more information link over to Wikipedia.org and read about the Battle of Verdun.